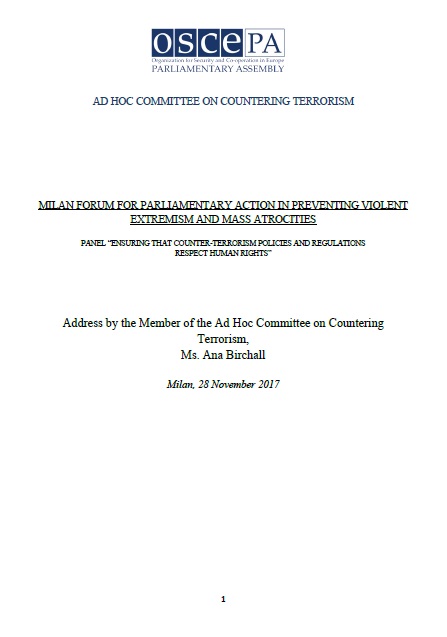 I am very pleased to address at this high-level Forum on behalf of the Ad Hoc Committee on Countering Terrorism of the OSCE Parliamentary Assembly. I would like to start by thanking the organizers, and in particular “Parliamentarians for Global Action”, for bringing us here today to discuss one of the most pressing challenges of our days – combating terrorism without compromising the respect for fundamental freedoms.

Terrorism has become an unprecedented threat to international and regional security and we have to provide a strong response to this fear-spreading phenomenon, but we need to bear in mind that solutions have to remain human, in a spirit of respect and communion. This Panel specifically reminds us of the need to treat each human being with respect and dignity, regardless of his/her political affiliation, ethnicity or religion.

Today we should ask ourselves the following questions: Can our counter-terrorism efforts and human rights obligations be mutually reinforcing? Should we sacrifice our long-standing commitments and values when it comes to the fight against terrorism? I am sure that all of us would give the same answers.

Let me stress from the beginning the fact that every effort in countering and preventing the terrorist phenomenon, radicalization or any form of violent extremism should be made in full compliance with respect for fundamental rights and freedoms.

First and foremost, we must recognize that by developing counter-terrorism strategies based on the protection of human rights, we are also tackling the root causes of terrorism and radicalization, which often lay in hopelessness and despair.

Addressing the root causes of violent extremism of any kind through efforts aimed at improving the social-economic conditions of people belonging to communities most vulnerable to radicalization and recruitment for terrorism must be an imperative for our all national Parliaments and not only.

Therefore, adequately safeguarding all human rights – including political and civil rights, along with economic, social and cultural rights – constitutes a key element of the comprehensive solution in addressing terrorism.

In 2004 the United Nations High-level Panel on Threats, Challenges and Change reported that recruitment by international terrorist groups is aided by grievances nurtured by poverty, foreign occupation, and the absence of human rights and democracy. Indeed, there is a growing concern that marginalization caused by human rights abuses can induce radicalization and nourish violent extremism.

This is why we should strive to build upon our knowledge and experience to develop forward-looking policies that promote inclusive, peaceful and respectful societies in our countries, while also using such experience and expertise in the aid of developing  or poor countries, but in a way of respect and adaptation to their own specificities. It is our duty as elected officials to encourage the adoption of national legal frameworks that allow a focused action on counter-terrorism in full compliance with the respect of civil liberties and human rights and prevents abuses or altering the purpose of the laws.

As Parliamentarians and representatives of our citizens, we have a commitment to be at the very forefront of all counter-terrorism initiatives. In order to meet this commitment, we are called to design innovative legislation and policies that strike a delicate balance between security and privacy, between effective counter-terrorism efforts and the respect for fundamental freedoms at every level, and most important in our days – the respect and freedom of every individual in the cyber space. To ensure the proper balance between privacy and safety, adequate safeguards against bulk data acquisition must be implemented in national legislation in order to address citizens’ rights to privacy and personal data protection.

When it comes to terrorist acts committed using or inside the cyber environment, or the exposure to hate and propaganda messages circulated through the virtual media, one of the main solutions that I have emphasized and advocated for, in Romania and not only, regards a proper education and development of a cyber security culture amongst our citizens. In this aspect, I even initiated a bill for introducing cyber security in the school curricula from the youngest ages in Romania. I truly consider that such actions can be taken at multilateral level as they are part of our efforts in both raising awareness among our citizens and also of the increasing cooperation and dialogue with our citizens.

In addition, we should provide oversight of the security sector and actively promote a continuous and healthy dialogue between national governments and parliaments, local communities, academia and civil society. Let me underline the key role that civil society plays in this context, as well as their important contribution in developing sustainable responses.

As a forum of 323 members of parliaments from 56 OSCE participating States spanning from Vladivostok to Vancouver, our Parliamentary Assembly has always been a strong advocate for the adherence to democratic values and international law principles, including, of course, human rights. In line with the Organization’s comprehensive security approach, the respect for the fundamental freedoms and the rule of law represent a cornerstone of our common security and prosperity aspirations.

Against this backdrop, the topic of this panel is of utmost importance.

We should always make sure that our security sectors act in accordance with our national laws and international obligations. In particular, no human rights violations should be justified by counter-terrorism narratives. This includes a wide range of rights, such as the freedom of speech, right to privacy, and, most important, the right to justice. The denial of justice to individuals and groups has direct repercussions on our societies and the cohesion within them, while unrestricted access to justice and fair trials are pillars of a functioning democratic system.

In the endeavor to boosting our counter-terrorism ambitions, over the years, our Assembly has adopted a number of resolutions pertaining to terrorism and radicalization, where its members unequivocally and repeatedly underscored the need for all counter terrorism measures to comply with the principle of the rule of law and the obligations of international law, including international human rights law, refugee law and humanitarian law.

For instance, we adopted a Resolution on Strengthening the Role of the OSCE in Countering Terrorism this year, two resolutions on Countering Violent Extremism and Radicalization that Lead to Terrorism in 2012 and 2011, one on Extraordinary Rendition Investigations in 2012, another one on Strengthening Effective Parliamentary Oversight of Security and Intelligence Agencies in 2006, as well as one specifically on Terrorism and Human Rights in 2005.

Apart from the many resolutions adopted over the years, in recognition to the challenges that lay ahead in this domain, the OSCE Parliamentary Assembly also recently established the Ad Hoc Committee on Countering Terrorism, which I am proud to be a member of. It currently consists of 11 Parliamentarians from 11 different OSCE participating States and our main goal is to promote the harmonization and advancement of legislative and policy frameworks pertaining to terrorism and violent extremism. By participating in fora like this, we are striving to stimulate international co-operation, the exchange of best practices, as well as to assist in the consolidation of global counter-terrorism efforts.

We are currently at the stage of defining our strategy and possible areas of contribution, taking into account the specific roles that other actors already play in this field. During our recent visit to Morocco we heard about the remarkable efforts of local authorities in preventing violent extremism and radicalization, including by fostering inter-religious dialogue, social inclusion, economic development and respect for fundamental freedoms. Youth, in particular, play a key role in this regard.

During the visit, we also learnt of the multiple challenges posed by the foreign terrorist fighters phenomenon as well as about the roadblock to achieving efficient information exchange.

In our 2015 Resolution on Comprehensive Legislative Reform on Foreign Terrorist Fighters, we precisely encouraged OSCE participating States to design new and more effective information-sharing mechanisms and collaborate with other regional and international organizations and agencies.

Lately, addressing the foreign terrorist fighters’ problem has become a priority for many international organizations, particularly in relation to the conflicts in Syria and Iraq and to the issues that stand behind migration, also generating legal debates within the sphere of counterterrorism and human rights.

In response to this transformation, and in the light of several terrible attacks in European countries or elsewhere, many supranational bodies, including our Parliamentary Assembly and our Committee on counterterrorism, have rapidly called upon states to address the foreign fighters` issue. The recommendations addressed the urgent need to overcome the phase of enhanced cooperation or information-sharing and get to the point of enacting new domestic criminal justice and administrative measures to suppress the phenomenon.

Speaking about foreign fighters, allow me to briefly present the efforts that Romania has undertaken in this regard. Even though Romania does not internally deal with the issue of foreign terrorist fighters/ returnees, we acknowledge the importance of early preparation for a global security environment plagued by the threat of global terrorism and our responsibility to contribute to the safety of fellow European countries. From this perspective, Romania regards travelling to conflict areas with the purpose of taking part in terrorist acts as criminal activities, which implicitly means that returnees are detained upon re-entering the country.

Also, on a more comprehensive approach and given the global context, Romania has created a complex prevention and response mechanism that ensures appropriate inter-institutional cooperation when dealing with terrorist threats. The National System for Preventing and Countering Terrorism is a mechanism that provides the framework of cooperation in the implementation of national policies, between the various state institutions involved in the prevention and response to terrorist acts.

We advocate for the use of all available international legal instruments in the fight against terrorism and in this regard I want to raise awareness about a joint initiative of Romania and Spain concerning the creation of an International Criminal Court for Combating Terrorism. Such an instrument based on international criminal law would reinforce the idea that response to a global threat, as terrorism is, requires multilateral action, based on law.

Finally, moving back to the Ad Hoc Committee on Countering Terrorism of the OSCE Parliamentary Assembly, I want to say that earlier this month we also visited the OSCE Secretariat and United Nations Office on Drugs and Crime in Vienna, where we had a fruitful exchange of views with relevant experts and civil society representatives.

This allowed us to better determine our inter-parliamentary added value within the complex system of international and inter-governmental bodies. Among others, we met with the OSCE Representative on Freedom of the Media to discuss the importance of safeguarding the freedom of expression and the freedom of information while shaping our counter-terrorism approaches.

To conclude, let me once again thank the organizers for inviting our Committee to this timely event. We are eager to engage with you and join forces to promote more effective and human rights-compliant counter-terrorism strategies. Our Ad hoc Committee on countering terrorism is open to dialogue and I want to avail myself of this opportunity to briefly inform you about our plans for the nearest future.

We intend to visit OSCE’s Field Operations in Southeast Europe and Central Asia, two areas in our region where the terrorist threat is particularly relevant. These visits will certainly help us to get better acquainted with the tendencies and main concerns on the ground, which should then influence our future actions.

Once again, our doors are wide open and I look forward to an interesting and constructive discussion.